God Is Not Finished With Me Yet

In 1984 Jesse Jackson addressed the Democratic National Convention in San Francisco, California. Barack Obama used the same platform 20 years later in Boston, Massachusetts to deliver a speech that propelled him to national prominence and then eventually the U.S. Presidency.

Mr. Jackson’s campaign for the Presidency traveled through dramatic high and low points.  In his stirring speech he said, “We are not perfect but we are called to a perfect mission.”  After covering his accomplishments he came to his failings.  In undoubtedly the most memorable line, he said, “As I develop and serve, be patient.  God is not finished with me yet.”

Instead of Mr. Jackson, Walter Mondale won the nomination that year and went on to lose to Ronald Reagan in the general election.  But the mental image of a public servant undergoing transformation by his creator right before our eyes is a powerful one.  The question for God and Mr. Jackson remains, “Why did He pause there, at such an imperfect state?” 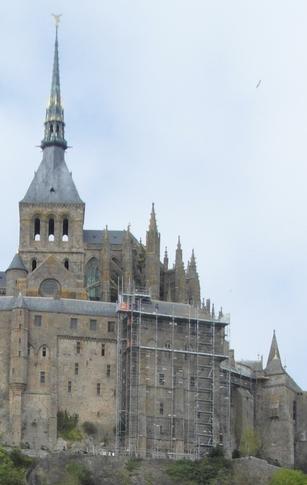 ​Biological evolution is the real sculptor of humans and indeed all life.  It crafts an organism that is just good enough, but there is no drive to be better than that.   On rare occasions variants have a selective survival advantage, and over time, this allows evolution to​ hone an organism to be an exquisite exploiter of its environment, a juggernaut for survival. But there is no “perfect mission”; no need to be the fastest - only fa​ster than the prey.

It should be puzzling, then, when we see needless death.  We can understand competition between species for survival, even pathogenic microbes against mammals.  But the death of innocents without benefit to anyone brings me up short.  One example of apparently “incomplete” evolution – falling short of the perfect mission - has troubled me since high school when I first read James A. Michener’s novel Hawaii.  Many missionary women died while giving birth and after refusing help from the native midwives.  Why do so many women have to die in “natural” childbirth, and thus foregoing their change to care for their children and ensure that their genes are transmitted?  Shouldn’t evolution have done a better job in protecting these innocent mothers and infants?

Their experience is not fictional and it is not trivial.  Among all animals, the high maternal mortality rate during parturition is uniquely human [1].  In prehistory, the death rate was about 25% of births [2], meaning a woman who might have 4 pregnancies in her lifetime could expect to die from one of them.  Maternal mortality during childbirth, caused by blood loss and septicemia, was likely a leading cause of death among women [3].  Those who survived were sometimes left crippled and unable to care for their infants or have more babies.

Nevertheless, in parts of the world today, maternal mortality resembles prehistoric rates.  In traditional societies, from the !Kung of Africa to the Piraha of Brazil, women are often left to give birth alone, greatly increasing their chances of dying during childbirth [5].  In India, 130,000 women die in childbirth [6].  Afghanistan may be the worst place to be pregnant. 1.6% of live births end in the mother’s death, and almost half of all deaths of women age 15-49 result from complications during pregnancy and childbirth [7].  Globally, an estimated 515,000 women still die each year as a result of pregnancy and childbirth [8].  Men face no comparable universal risk, not even from dying in warfare.

Survival in childbirth should be a high priority for the selective pressures of evolution, since it directly affects the rate at which a woman’s set of genes are passed on to the next generation.  Not only does maternal mortality mean a mother will not have additional children but she leaves behind motherless children.  When the widower takes another partner, these kids are then raised by a non-birth parent and are 100-times more likely to die from parental abuse than children raised by birth parents – what is called the Cinderella effect [9].  The Greek tragedian Euripides recognized the syndrome in 438 BCE: “A second wife is hateful to the children of the first; a viper is not more hateful.”

Death in parturition is a catastrophe for people and for their genetic legacy.  Put another way, a tribe with genes that reduced the rate of maternal mortality should quickly grow, outcompete their neighbors and become the dominant human form within a few centuries.  Why didn’t this happen?  How did we pause at this deadly point on the path of the perfect mission?

The most common explanation is that the pain of childbirth is a compromise with walking upright – bipedalism [1].  Walking on two feet creates a conflict between the limit on the width of the walking female pelvis and the growing width of the human infant head.  In order for humans to evolve their advanced cognitive functions, they need large
skulls.  This inevitably means an infant head puts excessive pressure on the mother’s restricted birth canal, leading to a dangerous delivery.

This explanation is nonsense.

Human ancestors starting walking upright about 4 million years ago, at a time when our heads were still small relative to the mother’s pelvic width and babies were still tiny at birth.  Up to about 200,000 years ago the braincase of our Neanderthal cousins still retained primitive size [10].   In our own human lineage the size of the infant brain
began to increase only about 600,000 years ago, and then the ratio of infant to mother weight increased enormously.

This coincided with the introduction of meat into the human diet and improvement in nutrition [1].  The increase in meat consumption may have been the result of greater communication and cooperation that came with language, improved cognitive skills and selection for a larger brain [10].  Meat in the diet led to the possibility for faster population growth, since introducing meat into a young girl’s diet shortens her the time to menarche, the time of first menstruation [11].  Chimps give birth once every 4-6 years, gorillas and orangutans once every 4-5 years, but humans once every 3-4 years [12].

The important point is that people were walking upright when the human brain was relatively small, and the size of the infant skull was in balance with the size of the birth canal.  About the time that meat was introduced into our diet, the infant head grew larger and we were poised for a population explosion.  The size of an upright woman’s pelvis
was a problem, but not a limiting factor.

A simple solution for evolution would be to have humans give birth to smaller headed babies, who then grew faster and larger after birth.  Apes, whose babies are only 3% of the mother’s body weight (compared to 6% for humans), have easy childbirth with very little mortality [13].  But we didn’t keep small heads.  In fact, human newborns weigh about 50% more than expected by comparison to other primates [13].  Instead we evolved several adjustments to human anatomy and behavior to accommodate a larger head:

·  The width of the female pelvis increased, giving what we now appreciate as a “swing of the hips”.
·  The birthing infant’s head is soft and malleable, allowing it to contort through narrower channels than if it were harder.  The plates of a baby’s head do not become firmly attached for more than a year.
·  The baby rotates during delivery (unlike the great apes), to first squeeze its head through and then turning to squeeze its shoulders through.
·  A woman’s pelvis partially dissolves at key connecting points (pelvic symphysis) just before birth, giving an average of 4-mm increase to the diameter of the birth canal.
·  Infants’ brains do grow proportionately more after birth than chimp brains, but this is not enough to prevent the devastating rate of maternal mortality.
·  Midwife assistance is a universal human behavior that likely arose early in our history to overcome the imperfect state left by human evolution.

With all these accommodations to achieve birth of a large head through a narrow birth canal, why did evolution stop and leave a 25% maternal death rate?  There are probably many more small solutions to the problem that would incrementally reduce the death rate.  Simple calculations show that a gene which reduced the death rate from 25% to just 22.5% would sweep through a population and become the dominant phenotype in between 300 and 3000 generations [14], or less than 75,000 years, which is well within the time frame of our human birth crisis covering the last 600,000 years.

The answer must be that there was a countervailing selective pressure NOT to reduce the maternal death rate.  One hint might be that despite the potential for a population explosion with the introduction of meat, our population size during most of pre-history remained stable or grew slowly [15].  For long stretches of time of people were widely dispersed and the total population was about 70,000, with about 7,000 breeders.

How was the size of the population controlled after the introduction of meat?  Death in childbirth should now be added to abortion, infanticide and warfare as “natural” ways to maintain slow population growth.  It is likely that this need to limit the population removed the evolutionary selective pressure to reduce maternal mortality.  This left us in an imperfect state of high maternal mortality.

Then came the explosion of the human population brought on by the abundance of nutrition produced by  agriculture.  On the eve of the emergence of agriculture, the world’s population was about 6 million, while today it is nearly 7 billion [16].  Up until the Common Era, the population growth was exponential, and then within the last 2000 years population growth rate has accelerated to an explosive velocity [17].  With a population multiplying 1,200-fold in just 11,000 years, the horrific maternal death rate was not enough to stem the tide.

Lessons for Mr. Jackson and Ourselves

Human beings are not a perfectly crafted species, despite our claim that we are formed in the image of God.  We have changed rapidly over a few hundred thousand years (not the millions that are needed to form some other animal species), and some of our features are caught still midway in development.  God is not finished with us yet, and lacking selective pressures He may never be.

Equality between the sexes is a social goal, not a biological fact.  Our genetic legacy places disproportionate burden on women to control the population, including risking their lives each time they give birth.  We have a special obligation to recognize and rebalance the risks of our biological inheritance.

Special thanks to Haley Yarosh for editing.